While the dust has to settle from the shock of the conventional wisdom that Clinton would win, the fundamental forces that impact currency direction for the coming year were clarified and unleashed on the US Election night. The roadmap for trading currencies in the coming year, has its starting point with the US elections.

A key lesson learned from the US elections is that forex prices and its technical patterns, do not efficiently predict future direction. A missing element is understanding underlying fundamental forces at play. Clearly, ramping up to the elections, the fear of a Trump win, manifested itself as being bearish on the Dollar. This fear triggered safe-haven rallies in Gold and strengthening of the Yen. But on election night the USDJPY and Gold first rallied and then quickly made U-turn back.

Was this pattern unusual or irrational?  The best way to understand the election night behavior of the US Dollar, Gold, and the Yen, was that prices are always essentially a balance of “expectation waves.”  In the case of the US election, the fundamentals impacting expectations were essentially psychological as “fear” and “uncertainty” were dominant emotions. However, it was classic swarm behavior with expectations shifting from bearish despair to a bullish post safe-haven relief rally.

However, it can be seen at this point that the Trump US Dollar Relief Rally is more than psychological. The US Dollar has reached 14-year highs. This is not a technical rally. It is a fundamental shift. 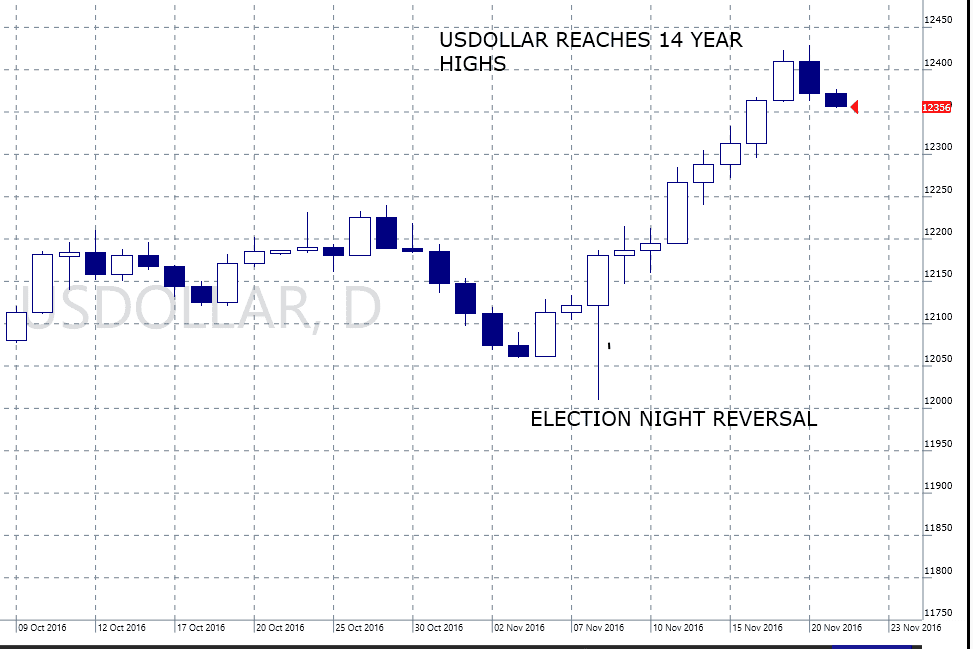 With the election over, currency trading strategies need to be cognizant of expectations with the following four fundamental and psychological forces:

In 2017, as the Federal Reserve Bank moves on its roadmap to increase US rates, traders should look to be long the US Dollar. A stronger dollar is likely to continue if the Federal Reserve signals a potential to increase rates more than once in 2017.  These fundamentals on the roadmap for increased rates existed before the Trump victory.  But a Trump Presidency gives ascendency to a bullish “Trumpeconomics” psychology from expectations of strong fiscal stimulus focusing on infrastructure. The result is a super bullish expectation wave. A bullish fundamental push on the US Dollar is therefore the overall direction of the US Dollar in the coming year. Keep in mind that a stronger dollar wave will also weaken the other currency pairs. A key consequence is that Central Bank rate decisions in 2017 will likely shift away from further cuts and greater monetary stimulation as they welcome a stronger dollar providing opportunities to import inflation. The US Dollar bull is doing the job for the other central banks.

Traders should pay attention to the USDJPY.  In 2016 having probed near 100 several times, the Yen has shown that fundamentally and psychologically, it cannot be too strong for too long. Safe-haven strengthening of the Yen is temporary in nature as its economy suffers from negative interest rates. On November 3rd, the USDJPY was 102.98 and as of November 15th, the USDJPy rose to 109.13. As of November 21st the Yen further weakened against the US Dollar to over 110. This is extraordinary. Again, to confirm that the Yen weakening was not a relief rally, but more substantial, the USDJPY pair reached Therefore, traders should look to buy the USDJPY on dips to 115 with further targets to 121.

3- The EURUSD: Target Parity with the US Dollar

The Trump Dollar bull will also generate a great opportunity to take the EURUSD much lower to parity with the US Dollar.  There are two forces therefore that will cause this bearish move. The first is the low inflation in the Eurozone, which is at about 0.5%. Currencies that have such a low inflation, just cannot be strong against the US Dollar for too long. The second force is the US Dollar as it strengthens into 2017. Traders have the opportunity to go for a 500 pip and greater move to sell EURUSD to parity.

Once again we need to apply the lesson learned on election night, that psychological expectations are a key component of fundamental forces. The conventional wisdom is a very bearish outlook for Sino-US relations. There is no doubt that there is an imbalance of expectations. Trumpeconomics wants a stronger RMB against the US Dollar to decrease China’s comparative advantage on export prices. A stronger RMB would, to some extent, stimulate domestic US competition with Chinese manufacturing.

In contrast, the Chinese want a stable economy and need export stimulation. Also, it is important to note that the RMB can strengthen against a basket of currencies, yet still weaken against the Dollar. The result is certainly an element of on-going “risk” and “uncertainty”. There is even talk about a “tradewar” where US tariffs are imposed on Chinese goods. The gauge to watch for traders will be volatility in the Shanghai Index (SHCOMP) which will be sensitive to the balance of expectations in this potential Trump-China conflict. Traders, however, should try not to blindly follow conventional wisdom in this area. The new administration will likely look to make short-term “deals” on China trade relations. If successful, a Bullish reaction is an unexpected, but highly likely outcome.

The best way to describe the outlook for 2017 is that all signs point to the emergence of the Super US Dollar Bull from both fundamental and psychological force perspectives. Of course, traders can trade in either direction on appropriate entry and exit strategies. Yet, it’s good to remind ourselves of the old adage that “the trend is your friend-unless it is at an end!”

It’s never too early to start trading your trading education. Download your free copy of our 25 Trading Tips for Serious Investors eBook now!