True wealth at retirement requires us to compound our money at ever higher rates of return.  Any extra costs charged to us by those we pay to help us grow our money or any lost opportunities that come from being put into poorly performing investments significantly reduces our long-term financial health and negatively impacts our retirement lifestyle.

The bad news is the current system of building for retirement is broken.  Any money you have under the management of a “professional” money manager is not working for you or for your future nearly as hard as it could be and you are the one suffering now and in retirement.

In his article, Mr. Steverman, reports, “Many financial advisers just don’t care what’s best for you. But with an industry awash in misconduct, the bigger issue may be that they aren’t required to care.”  He goes on to say, “You’d be forgiven for assuming your relationship with a financial adviser carries the same sort of solemnity as, say, attorney and client or doctor and patient. An attorney is bound to zealously represent you; a doctor pledges to do no harm. So why aren’t financial advisers subject to the same duty? Well, the economics of the industry—fees, commissions, quotas—can end up standing in the way.”

The ugly truth is that those we hire to help us grow our retirements are in fact not expert traders…but expert sales people.  They can more quickly grow their annual salary by selling more people into their management than they can by helping you grow your money faster and better.

Mr. Steverman says, “The White House under President Barack Obama estimated that Americans lose $17 billion a year to conflicts of interest among financial advisers. Wall Street lobbying groups dispute that math—and they’re right to do so. The actual dollar amount is probably much higher.”  He goes on to write, “Various academic studies show conflicts of interest costing investors dearly. One found that funds sold by brokers did 0.77 percentage points per year worse than funds bought directly by investors—even if you ignore some big broker fees. Another study compared investors advised by brokers with investors put in a target-date mutual fund. Those who got advice underperformed by 3 percentage points per year.”

Most people have no idea just how much their advisors cost them in hard fees and in lost opportunities.  If you have money under “professional” management, how well they did for you last year?  The last 5 years?  Have you talked to them about a plan for improving your results?  Have you plugged your numbers into a calculator to see when you can realistically retire based on how well they’re doing for you?  If you haven’t, you should.  It’s eye opening.

Below are two screen shots from Dave Ramsey’s site showing just how significant any increase in your annual compounding has on your accounts.

The first chart shows a hypothetical 47 year old who starts with just $10,000 and who is also able to save an additional $100 a month all working at the annual return of an average mutual fund of 4% a year.  Notice the result is just $58,903 expected return over those 20 years. 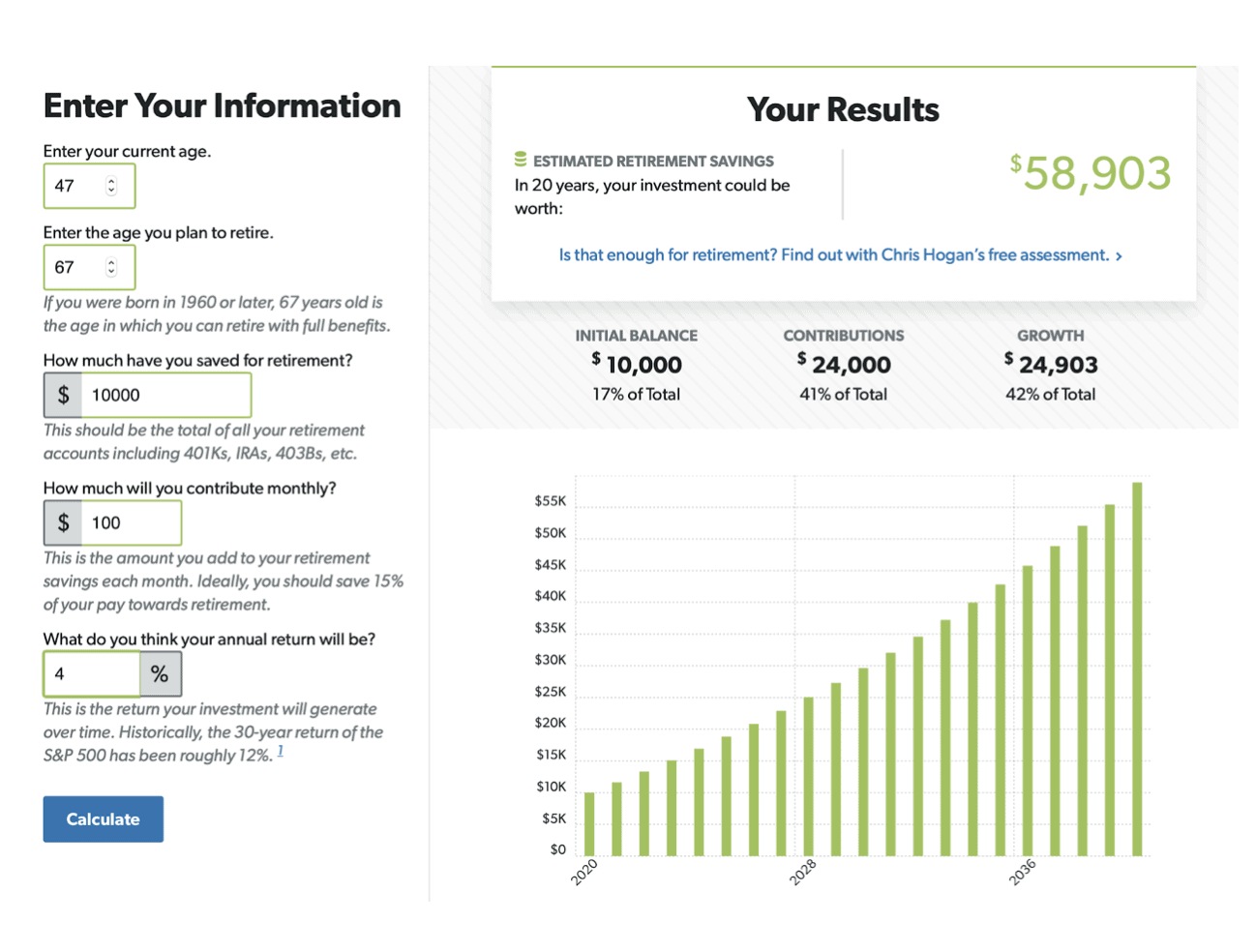 The next chart shows the exact same hypothetical investor who smartly decides to trade for themselves and is able to put their money to work at 20% a year.  Notice the significant difference!  The first chart shows an account worth just $58,903 while the second chart shows the account has grown to $839,240! 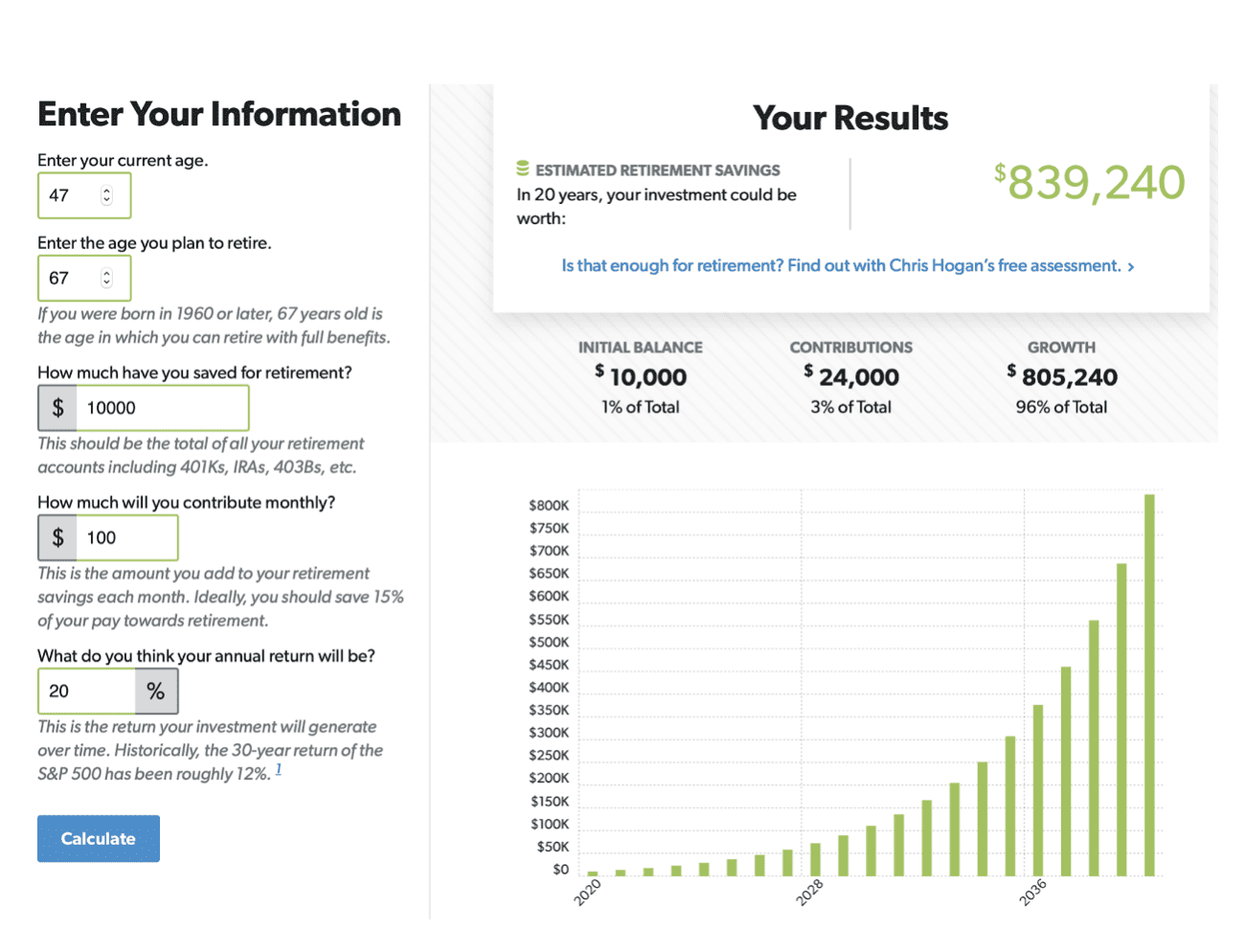 Individual investors and traders with smaller accounts have built in advantages and can generate far higher returns compared to advisors with billions of dollars under management.  Warren Buffet guarantees a 50% annual rate of return for smaller accounts and he became a billionaire trader by averaging 30% a year for decades even as his account size grew into the billions of dollars.

You don’t have to have a lot of money right now.  You don’t need to save a lot of money and sacrifice lifestyle throughout your life….You can still have a wonderful retirement but only if you are willing to take the time and make the effort of putting your own money to work for yourself.

And the Forex market is the perfect vehicle for making up for lost time and lost compounding.  It’s fast moving, it allows for significant leverage (so even smaller accounts can see enormous returns), it trades 24 hours a day, 5 days a week (available when you are) and it’s something anyone can do…you don’t have to be a professional trader to get started.