WISDOM:
“When the opponent expands, I contract. When he contracts, I expand. And when there is an opportunity, I do not hit. It hits by itself.” – Bruce Lee, “Enter the Dragon”

The party’s over in Europe, as the end of a popular economic stimulus has been announced.

The European Central Bank (ECB) has decided to end its monetary policy of quantitative easing (QE) by the end of 2018, which should make it a lot harder for businesses and individuals to borrow and invest at low interest rates.

After years of recovery from a serious debt crisis, the ECB decided in 2015 to adopt an economic stimulus of buying assets from commercial banks. A strengthening Euro in the wake of the Brexit vote emboldened Euro traders and investors, and the QE practice witnessed economic growth across the eurozone while keeping inflation rates near or below 2%.

Many economists credited QE with helping to revive the eurozone economy, helping it to climb out of the depths of the debt crisis.

That was then; this is now. Artificially low interest rates tend not to stay that way for long.

The Euro has weakened amid political unrest in Italy and international trade conflicts, the U.S. Dollar has strengthened for much of 2018, and the QE policy has become increasingly divisive within the ECB. 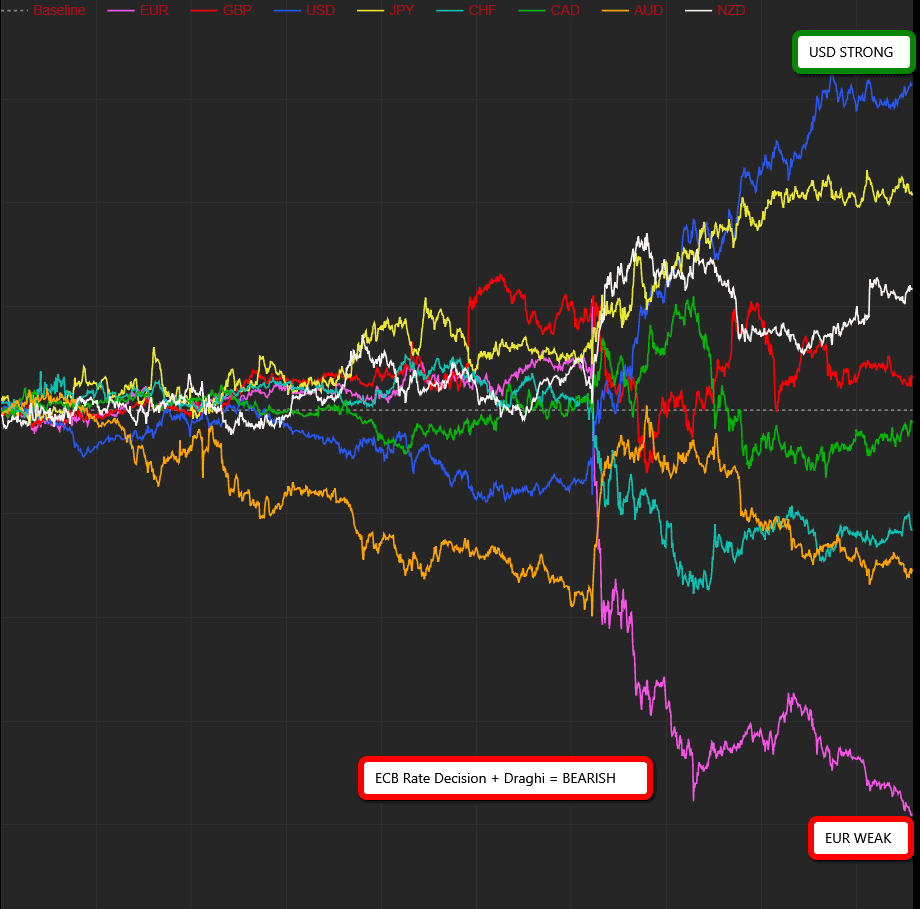 Draghi said the ECB didn’t wish to “underplay the existing risks” in the eurozone economy, but believed it was time to do away with the so-called “easy money” policies that have existed in the region in recent years. He said the ECB would slow its purchase of government and corporate bonds in September, and phase out QE by the end of the calendar year.

Currency markets were quick to react to the news with increased volatility centered on the Euro.

Tad Devan, market analyst at Market Traders Institute, said the ECB decision may cause a temporary spike for the Euro immediately following Draghi’s announcement, impacting the USD in the short term.

“We could see the market drop significantly for the U.S. Dollar,” said Devan. “If the Euro goes up, even temporarily, we should see the USD come down. The dollar may pullback in the short term, but I see it strengthening going forward.”

“The weakening Euro is exactly what the ECB needs as it continues to tout growth and recovery for the eurozone,” said Pulver. “I see trading opportunities with the Euro against the CAD, the Yen, Aussie, Kiwi and U.S. Dollar, but I’ll steer clear of the Swiss and Pound.”

Draghi pledged that the ECB will keep interest rates low at least through the summer of 2019.

“Draghi’s continued dovish words pushed the ECB timeline back to summer 2019 for a possible interest rate increase,” Pulver said. “The market expressed its disappointment by hammering the Euro in a very active trading day, topping off a very busy calendar week.”

****Nothing in this email is intended to be personalized trading advice. Any information provided by Market Traders Institute, Inc. is solely for general information purposes. Please see our full disclaimer for more information.****

Just in – ECB rate decision, and what it means for you