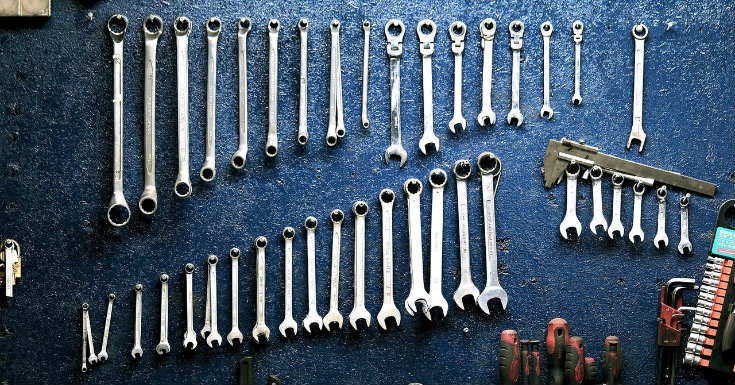 The Elliott wave indicator is a popular tool used in technical analysis that allows traders to predict the repetitive and cyclical nature the currency market (or any other market, such as the stock market). Elliott Wave theory, developed by Ralph Elliott, proposes that the seemingly chaotic behaviour of the different financial markets isn’t actually chaotic. In fact the markets moves in predictable, repetitive cycles or waves. These waves are a result of influence on investors from outside sources primarily the current psychology of the masses at that given time.

Let’s take a deeper look at how to identify these different patterns.

Impulse waves can be broken down into sub-patterns comprising five structures. These structures are set over three distinctive patterns — namely the extended waves, the diagonal triangle at wave five and lastly the fifth wave failure.

Corrective waves can be broken down into six subcategories of waves. The categories are based on the direction and patterns of waves beginning from zigzag, to flat, irregular, horizontal triangle, double three and triple three patterns. Each pattern provides valuable insight with regards to market cycles and consistency.

To fully understand the Elliott wave indicator, it is important to understand the psychological reasoning behind each of these waves, because the zigzag of the prices is the variation of investor optimism and pessimism. 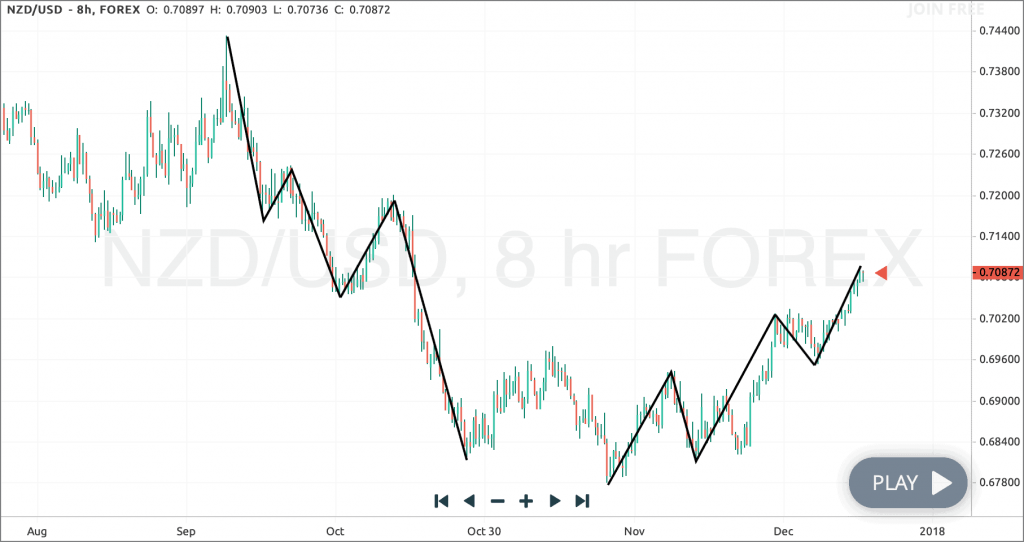 How to Read Elliot Waves

In order to identify an Elliott wave the pattern must satisfy the following conditions:

A corrective component consisting of three waves implies a countertrend in the opposite direction to its preceding impulse pattern.

The corrective pattern then must satisfy the following conditions:

There are other patterns within Elliott waves (zigzags, triangles, etc) but the impulse and the corrective components are the most used ones when it comes to technical analysis of trends.

Wave 1 (impulsive) is an increasing small wave, a light pressure of demand (Bull Move). In Wave 1, prices rise because of a relatively small number of participants who buy traded currency pairs, for fundamental or technical reasons (speculation), pushing the prices up.

Wave 2 (corrective) is a decreasing wave, downward pressure in the supply (Bear Move). After a significant growth, investors may receive fundamental and technical signals that the currency was over purchased. In such a moment, wave 2 increases when people who initially bought decide to take advantage, while the newcomers initiate short positions. Price starts in the other direction but generally does not pass over the minimum initial position which initially attracted buyers at a moment of the wave 1.

Wave 3 (impulsive) is an increasing small wave in a pressure of the demand (Bull Move). It is often the longest of the five waves, wave 3 is a sustained wave when a large number of investors were mobilized by wave 2 to buy. With a larger number of buyers, the safety margin increases, extending above the maximum price originally formed by the wave 1. At this point, the threshold of resistance is one of support.

Wave 4 (corrective) is a small wave in a supply pressure (Bear Move). At Wave 4, buyers start getting tired (they remain without money or optimism) and again use the over purchasing signals. Generally, there are still quite enough buyers on the market, so here the decrease is relatively small.

Wave 5 (impulsive) is an increasing small wave in a demand pressure (Bull Move). Wave 5 is the final movement of the observed sequence evolution. Right now buyers are all motivated by greed rather than fundamental or technical justification, to buy and bid higher prices elsewhere. Normal price reaches a maximum before starting to move in the opposite direction.

How to Use Elliott Wave for Trading

There are two specific ways of trading with the Elliot wave in the financial markets. The first and most immediate one requires identifying where the current price is situated within the current Elliott wave cycle. You can then forecast price direction and magnitude of the next wave in the cycle. 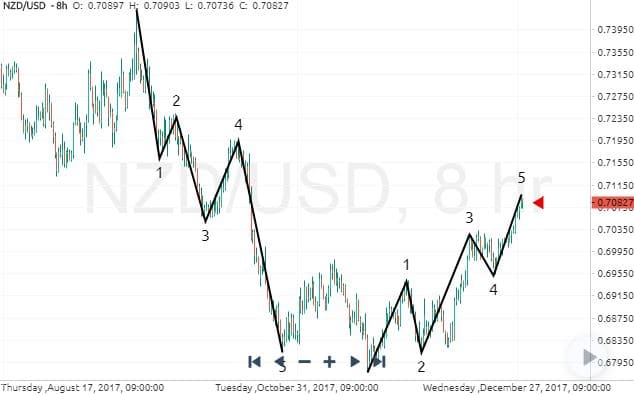 Article Name
What is the Elliott Wave Indicator
Description
Elliott Wave theory, developed by Ralph Elliott, proposes that the seemingly chaotic behaviour of the different financial markets isn't actually chaotic. In fact the markets moves in predictable, repetitive cycles or waves. These waves are a result of influence on investors from outside sources primarily the current psychology of the masses at that given time.
Author
Tyson Clayton
Publisher Name
Market Traders Institute
Publisher Logo

How to Learn Foreign Currency Trading

Finding the Right Trading Style for Your Personality