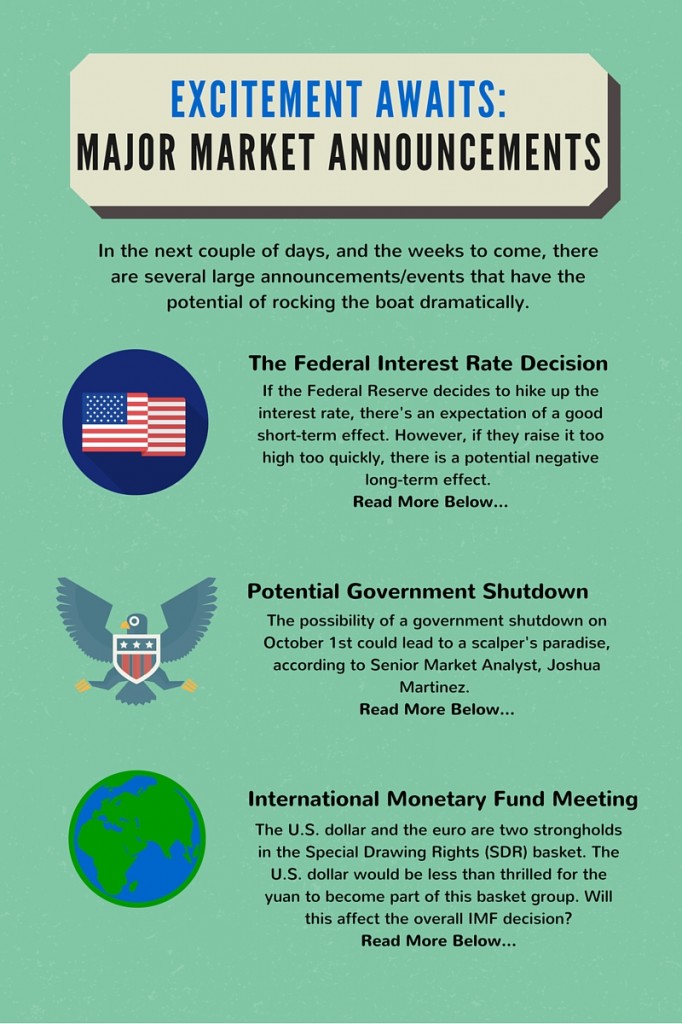 We all know that the phrase ‘potential volatility around the corner’ is a little laughable.

We’re surrounded by high volatility in the Forex market – which is why traders need to be working on their scalping game.

If you’re in and out – and you know what you’re doing – there is an excess of profit potential.

In the next couple of days, and weeks to come, there are several large announcements/events that have the potential of rocking the boat dramatically.

I can already hear you groaning.

I realize that this decision has been in every financial headline across the board, and there’s a reason: the future of the U.S. dollar is in the crossbeams.

If the Federal Reserve decides to hike up interest rates, there’s an expectation of a good short-term effect. Many traders will start trading with this currency, because they may receive a higher rollover via the Forex market.

However, if they raise it too high too quickly, there is a potential negative long-term effect.

If the interest rate is too high, it will hurt the U.S., and consequently the U.S. dollar.

How does this make any sense?

It will scare the consumers away from big purchases, where they would have to borrow from a bank.

In other words — You can say goodbye to the Real Estate market if you are looking to sell your home or starting a new local businesses. Many will be too afraid to take out loans, because they can’t afford the interest rates that will be tacked on.

If the interest rate doesn’t rise, we will continue to see market movement in the usual technical manner.

I hear you! A lot of traders believe that the United States government shutting down for the second time in the past couple of years is only an embarrassment to the country.

But…it does affect your trading.

In fact, Josh Martinez, Senior Market Analyst, says that this is a “scalper’s paradise.”

He knows that this is not the time for position trading, as “you’re more likely to see sideways movement.”

The International Monetary Fund (IMF) will have their meeting regarding China on October 9th through October 11th.

The IMF’s purpose is to stimulate worldwide economic growth, and one of their requirements to be a member is to have free trading currency.

Despite Beijing’s recent devaluation of the yuan, the IMF believes that the drop in the stock market will have no affect on their decision.

The main question other members of the IMF are asking is… Is China trustworthy?

They might also be concerned about how this decision will affect the position of the U.S. dollar.

The U.S. dollar and the euro are two strongholds in the Special Drawing Rights (SDR) basket. This basket is for emergency-lending funds, in case one of the member countries needs the assistance. The U.S. dollar would be less than thrilled for the yuan to become part of this basket group.

Why? The U.S. dollar would be significantly challenged by the yuan.

Though we may forget, the United States owes a lot of money to China. The country is nearly self-sustaining, and they have a strong middle class.

These are both qualities that the U.S. is considerably lacking.

The main thing to know is that, come October 9th, all eyes will be on the market.

Are you now worried that you’re not properly prepared to trade these announcements?

Fill out the form below to attend one of our upcoming webinars – where we will equip you with the knowledge needed to potentially increase your profit potential.