G-7 leaders met to discuss global trade issues during a Summit this weekend in Canada.

And a famous pancake house is now selling burgers.

Yes, it’s been a crazy week, and it’s only Tuesday.

Kevin Dixon, senior trading analyst at Market Traders Institute and host of MTI’s Opening and Closing Bell, suggests the forex market has already factored in the anticipated interest rate, so he’s not expecting much volatility after the announcement.

“Rate announcements and employment numbers tend to generate the greatest price action at the time of the event,” said Dixon. “Once a move has been telegraphed, as this one has, markets tend to move in to fill the price range expected. The only thing that would really lead to unusual volatility is if the FOMC leaves the interest rates unchanged, which would be completely unexpected and may generate a snap response among traders.”

MTI market analyst Chris Pulver, host of “The Pulver Report” and the MTI Momentum Breakout course, offers his insights on what the FOMC decision may mean for traders (see chart). 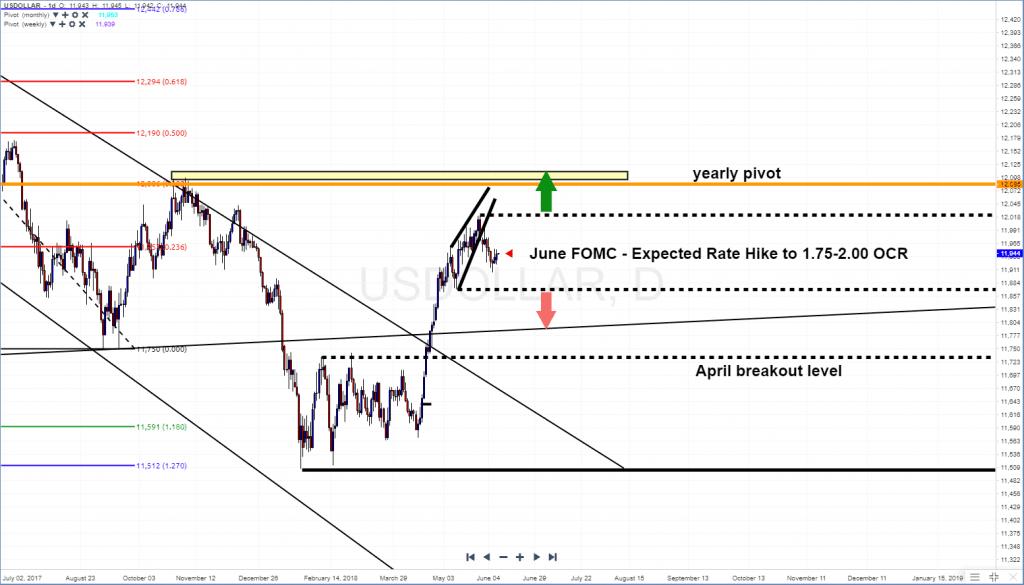 How will a rate hike affect currency trading?

“The U.S. Dollar has received an impressive push since mid-April, and remains stable heading into the FOMC announcement,” said Pulver. “There is a real environment of fundamentals juxtaposed with technicals, which may lead to volatility in the forex.”

The USD is offering one of the highest yields of any major currency, and Pulver suggests the Fed seems to be leading the way for other central banks to slowly wean itself away from near-zero percent interest rates.

“We have a yearly pivot around 12,090, and a significant breakout/balance level around 11,730,” said Pulver. “The FOMC decision has seemingly been priced in, which may quickly transform the movement into a familiar ‘buy the rumor, sell the news’ scenario for traders.”

From a technical standpoint, the USD has rallied aggressively, according to Pulver, and overbought/oversold conditions are registering in the forex market. Minor corrections capped a terrific April-May trend heading into summer trading, and Pulver anticipates the USD will remain stable going forward.

With so much noise on the international scene this week, analysts encourage traders to weigh outside market influences, but stay focused on achieving your individual goals for trading.

“The Fed is very calculated with regard to delivering commentary, and traders may be looking elsewhere for clean trading during a busy calendar week,” Pulver said.

At least the burger options will be plentiful.

Identifying Candlestick Patterns: Bullish Crown (and Why it can be Tricky)

The Euro is under pressure this week.