FX 2017: A Trading Roadmap to Thousands of Pips

FX 2017: A Trading Roadmap to Thousands of Pips

2017 promises to present significant opportunities for large gains in Forex trading. In many ways it is a unique set of circumstance, a perfect fundamental storm of forces, which leads to thousand of PIP movements. Let’s look ahead and examine several scenarios.

The Federal Reserve’s increase in interest rates on Dec 14th of 25 basis points, along with a projection of three more increases in 2017, combined with the election of Trump has unleashed a strong and persistent US Dollar bullish sentiment wave. The Federal Reserve’s increase in rates is likely in 2017 to include further increases, which will be only dollar bullish in its impact. The first 100-200 days of a Trump administration may engender expectations of a Trillion dollar fiscal stimulus. The result is that the USD, measured by the US Dollar Index, which already has reached 14 year highs, will go even higher. The take-away for traders has to be to be buying dollars.

The strong 2017 USD adds to the probability that the EURUSD will reach parity in 2017 as a stronger dollar creates head-winds for a bullish Euro. But the Euro has its own internal fundamental bearish dynamics as the Eurozone’s inflation rate is at a meek 0.6%. Add to this low rate the fact that recent European Central Bank projections are that reaching  2% inflation targets is not even on the horizon. The extension of Quantitative Easing from March to June of 2017 will result in over 2 Trillion euros being purchased to waken up a difficult economy facing unemployment levels of 10%. The Euro can of course, have rallies, but the parity with the US dollar, when the EURUSD breaks 1.05 is in the cards. That is at least a 500 pip target. 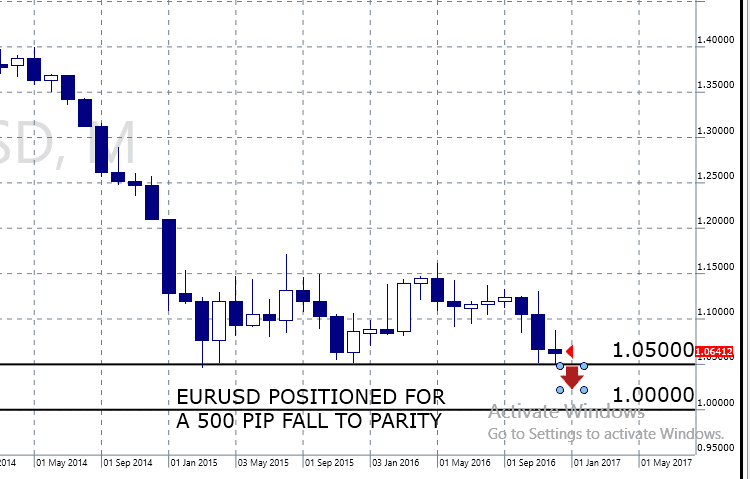 The Yen weakness against the US dollar presents a potential of a 1000 Pip move to 125. This scenario reflects an assumption that US rates will rise to 1% in 2017, giving lift to the USD Bull. Add to this the fact that the Bank of Japan’s pledge to control the 10 year bond yield at zero, is forcing shorter rates to be negative and providing behavioral incentives to consumer more. We don’t know if it will work, but if it does, in combination with a strong dollar, USDJPY price points of 120 and 125 are on the horizon. 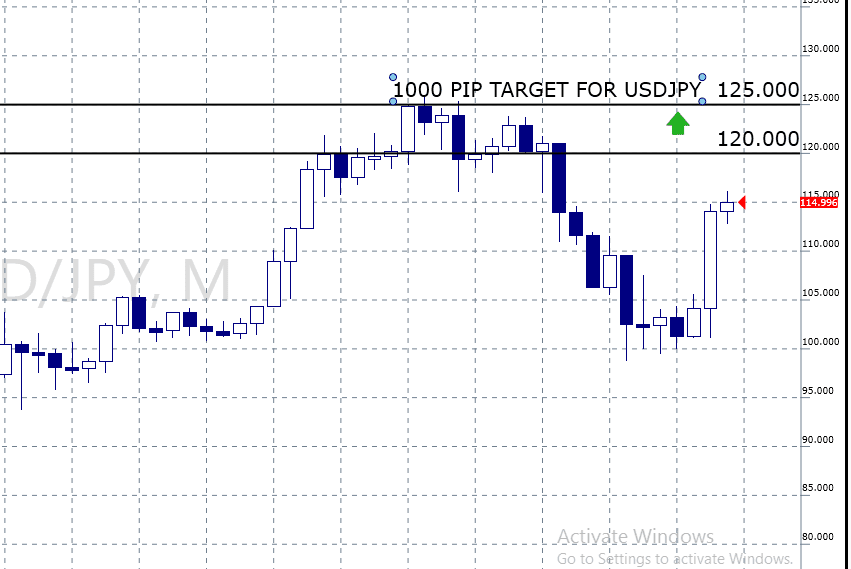 This crosspair is popular with many traders as it offers high ranging behavior. The scenario for 2017 generates a fantastic potential of a 1500 PIP move to 160  and then a possible 3500 PIP move to 195. Achieving these target depends on the Yen continuing to get weaker, and the British Pound gaining bullish sentiment as its inflation rate is likely to overshoot the 2% target by the Bank of England. Significantly, the BOE shifted its stance to a neutral biaseon rate changes. This means that it is on-guard for potential increases in interest rates, if inflation is ignited by the rise in import prices. The combination of fundamental forces in both UK and Japan make the GBPJPY crosspair, one of the most interesting pairs to trade in the coming year.

What these three currency pairs have in common is that the price action reflects fundamental forces that have been unleashed. Trading these pairs does not require complicated strategies or a mess of indicators. While most traders look for intraday scalping, 2017 can be understood as the year where position trading strategies can ride fundamental waves to thousands of pip gains.

Once you have the trading aspect down, start planning your trading profits for free with Josh Martinez’s Profit Plan!

The Forex Profit Hacks Series: 4 of 5