Forex is a massively large and diverse market attracting people, banks, and businesses from all over the world. But as markets go, it is not complex. Compared to the stock market with thousands of publicly traded companies reporting their earnings every quarter, the number of strategies associated with stock and options trading, and all the news and noise generated by report on the happenings of all these companies, the Forex trader has very little to sort through. Forex traders also generally operate with much more leverage than that employed by stock investors and so are more heavily impacted by even small market moves.

When taking each of these three factors under consideration, (1) the larger number of market participants, (2) the heavily focused trading (on just 7 major pairs), and (3) the substantial leverage employed by most Forex traders), it becomes important to understand and closely follow the news and report levers that do impact currencies.

These levers include any government report reflecting the health of their economy. One of these for the U.S. is the non-farm employment report released on the 1st Friday of every month.

Knowing which reports to watch and when the tracking comes out is critical to the swing trader. Swing traders hope to capture the profits of a large move, sustained by a solid and obvious trend.

But even beyond knowing about these reports and being aware of when they are released to the public, the swing trader must avoid a common pitfall to be successful.

Many traders think the focus should be on the nature of the news itself. Does the report show favorable growth? Does the country’s economy appear to be healthy and primed for additional growth? How does this country’s economic outlook compare to other countries?  These questions and more should be asked by the swing trader.

Smart Forex traders know when the reports come out (so they can anticipate entry points) but they wait until they have a feel for the market’s reaction to the news before they enter.  Remember, swing traders look for trades that extend over a longer time frame (say a few days) and they want to enter trades with a high probability of larger wins.

The safest way to play this strategy is to invest with the trend. This means to get in somewhere higher than the low and to get out somewhere lower than the high. Remember the old adage, pigs get fat and hogs get slaughtered…swing traders don’t need the whole move to be successful, they need to capture the fat and obvious middle.

Below is a sample daily chart of the EUR/USD showing a recent non-farm payroll (NFP) report released by the U.S. The numbers reported in this report were bad (-20,500) but looked good compared to forecast (-22,000) and the previous month’s report (-870,000).  A cursory glance at the news would indicate the actual numbers to be on a positive trend…but the market’s reaction was actually quite bearish over the next few weeks as evidenced by the chart below: 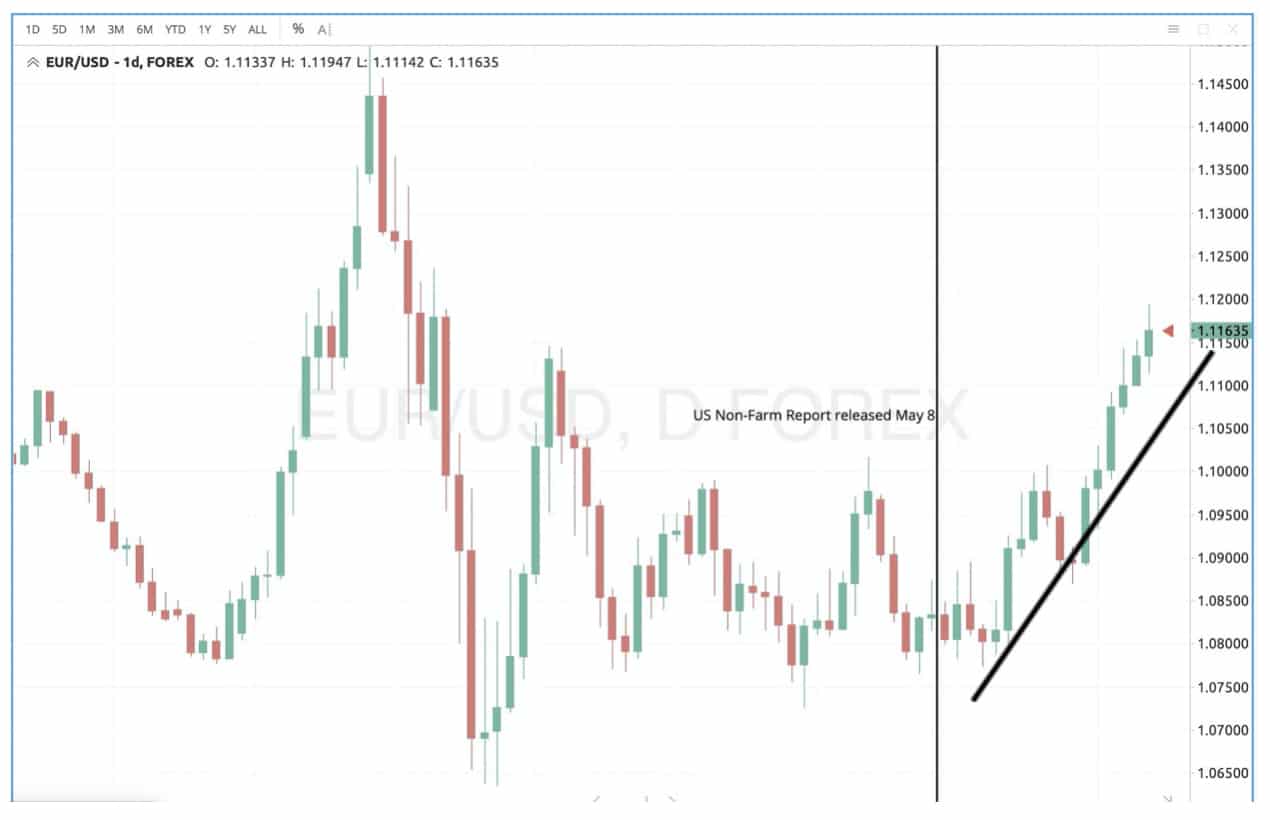 The market interpreted the latest NFP as extremely negative for the U.S. Swing traders trying to anticipate the market’s reaction would have lost money. Be patient before the trade (waiting for the right time) and then be patient in the trade and ride the trend by not cutting profits short.