All successful traders employ a system that gets them into and out of a position. If you decide to trade the Forex, you will need to find a successful system and follow it carefully. This doesn’t mean that every trade you make will be profitable because all systems sometimes break down when the market shifts. Like the shift from normal volatility to abnormal volatility shown on this daily chart of the EUR/USD currency pair. 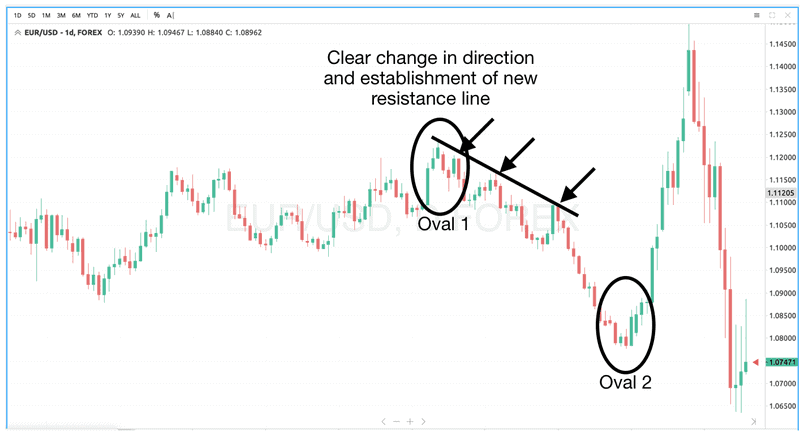 Now look at Oval 2. This shows a new change in direction, but the market moves too fast to provide a clear sense of the new support line.

A careful trader focused on following their system would not be able to get into the market even as it rises from 1.01815 to over 1.145. This move happened during a period of extreme market volatility.

The temptation would be for the careful trader to think they could (or should) tweak their system to better take advantage of such great price movement.

This is a clear example of how greed can so easily pull even cautious traders out of their system. In hindsight, it’s easy to see how one could have made significant profits during the short period of time after the market moves starting at Oval 2.

There will always be a temptation to tweak your system as you try to maximize your profits. This is a danger and would eventually lead to the much poorer system of simply buying, then hoping and praying for profits.

Sometimes it’s hard to consistently follow your strategy, especially when you miss out on big profits. But the best traders discipline themselves to trade their system and seek for a repeatable way to generate consistent profits from the market.