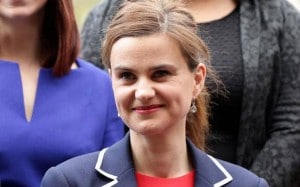 Yesterday Great Britain reeled from the killing of Labour Party lawmaker Jo Cox.  Ms. Cox died after a man armed with both a gun and a knife attacked her on the street in her northern England West Yorkshire constituency.

Ms. Cox was a vocal supporter in Parliament of the “Britain Stronger in Europe” group, and first accounts of her attack indicated that the assailant yelled, “Britain First,” during her attack, indicating his alignment with her opposition.

In response to the attack, both official groups in the EU referendum campaign — Britain Stronger in Europe and Vote Leave — have suspended campaigning activities through the end of this week.

“It’s right that we are suspending campaigning activity in this referendum and everyone’s thoughts will be with Jo’s family and her constituents at this terrible time,” said British Prime Minister David Cameron, who had been scheduled to hold a rally in Gibraltar Thursday in favor of the U.K.’s continued membership in the EU. He called off the speech

Effect on the Vote

The odds of a vote to remain climbed today, and financial markets appeared to interpret the killing as an event that could shift voter sentiment toward the remain camp.

Still, the two camps remain extremely close, and the shutdown of campaign activities leaves the result of the Brexit vote even more in question.

Stay with us on Brexit

We will stay on top of the Brexit vote story, and we invite everyone interested to join our 3-day paid event devoted to this historic vote  To be a part of our free webinars, all you need to do is register here and follow our expert analysts as more Brexit news comes in.

Macy’s gives thanks for Chinese consumers