Swing Trading in an Algorithmic World

Swing Trading in an Algorithmic World

The Forex market has never been more accessible to individual traders than it is right now.  Not that long ago, everything that happened in the markets was done human to human.  A human decided what they wanted to buy (or sell) and they went to another human (a market maker) to place their transaction. With the advent of computers and networking, this open outcry system has been replaced mostly by computers.

In 1990 the “Electronic Communications Network” (ECN) established in 1990 to facilitate electronic trading. This started a cascading process that opened the Forex markets to retail traders with smaller accounts like we know it today.

Progress continues to be made in computer processing power, network speeds, and programming which continues to change and affect how currencies are traded. Most of these changes have benefited individual investors, allowing them to trade from home, with small accounts, and giving them access to wide-ranging and comprehensive educational programs to help them know how to take advantage of opportunities presented in the markets.

In addition to bringing wrenching change in how currencies are bought and sold (and who does the buying and selling), computers have also changed the market in other, more subtle ways. The trading that used to be done by humans and between humans is now being done by computers and mostly between computers.

Many big players like banks who make a market in currencies have developed their own algorithms to get computers to what it might otherwise cost a lot of money to have a human do. These computers are programmed to accept trades and then look for ways to off-set the risk of those positions quickly.  Banks are focused on making the spread between wholesale and retail prices, not to speculate on market direction.

Despite today’s computerization and algorithmic trading, all traders can still find opportunities to profit in the markets. But how? The answer is, it depends.

Here’s an hour chart of the EUR/USD showing 5 days of trading activity: 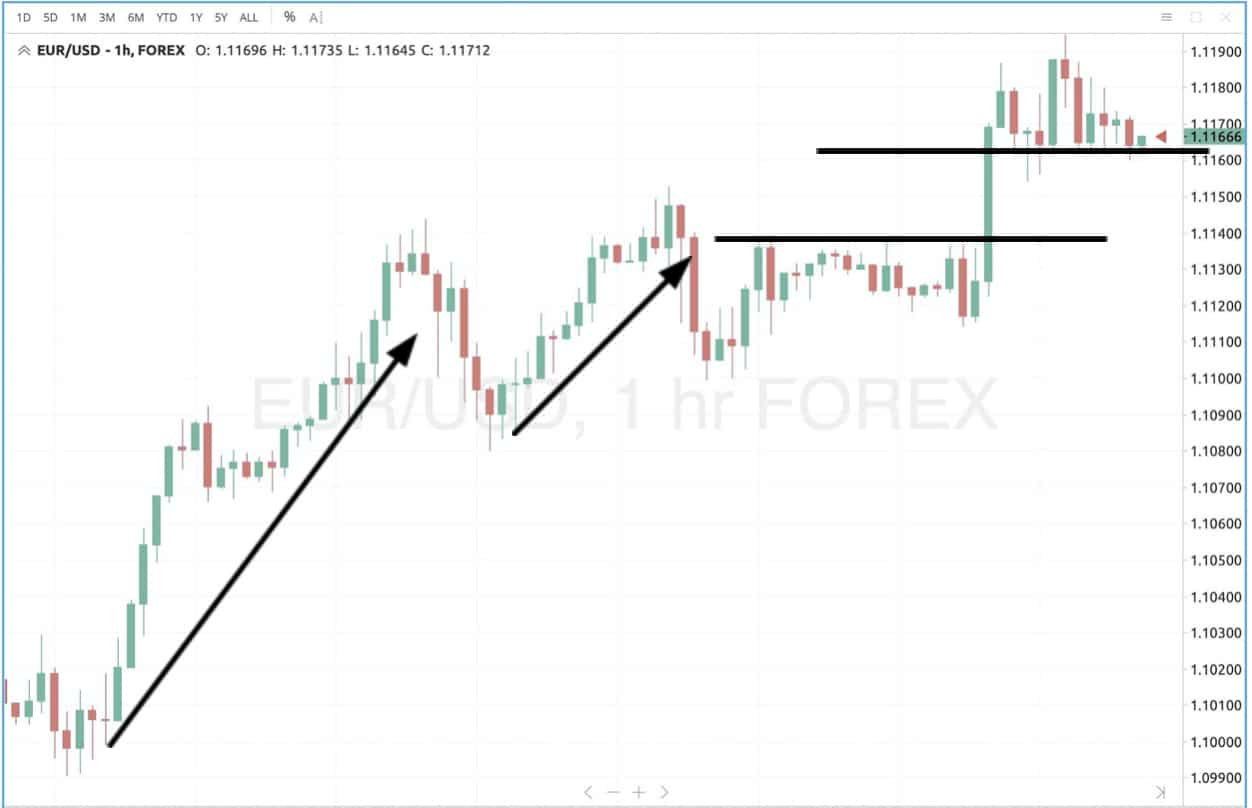 The two arrows show periods of obvious bullish trends while the two flat lines depict times when the market’s trend was flat.

The computers used to create markets in the Forex today have no emotional attachment to whether the markets are bullish, bearish, or flat. They simply follow their programming.  As a trader, you must similarly discipline yourself to avoid emotions that might cloud your judgement and pull you away from following your system.

For swing traders this means taking a number of losses and not letting the memory of those losses cause them to get out too soon when one of their trades begins to really run. Learning to cut profits short and let profits run is critical skill for any swing trader to master.