The International Monetary Fund (IMF) expects the world to face the worst financial crisis since the Great Depression from the 1930s as the global economy struggles in the face of what they call the “Great Lockdown.”  They expect the global economy will contract by 3% in 2020, which is worse by far than the 0.1% contraction seen during the Great Recession of 2008-2009.

The IMF’s April 2020 World Economic Outlook report states in part; “In a baseline scenario–which assumes that the pandemic fades in the second half of 2020 and containment efforts can be gradually unwound—the global economy is projected to grow by 5.8 percent in 2021 as economic activity normalizes, helped by policy support. The risks for even more severe outcomes, however, are substantial.”

In this same report, IMF’s Chief Economist, Gita Gopinath stated, “It is very likely that this year the global economy will experience its worst recession since the Great Depression, surpassing that seen during the global financial crisis a decade ago.  She went on to describe the current Covid-19 driven crises as a great lockdown and recently told reporters that “this is a crisis like no other.”  She expects the total cost to global GDP to be $9 trillion in 2020 alone.

According to IMF’s breakdown, Canada’s economy is expected to be more negatively impacted than the economies of the U.S. or Japan, which only expect a 5.9% contraction.  On the other hand, the 19 European countries in the Eurozone are expected to have a combined 7.5% contraction, while the U.K. is expected to have a 6.2% decline.  Despite all this negativity, the IMF expects China to expand its economy by 1.2% since its economy is already starting to slowly open up. 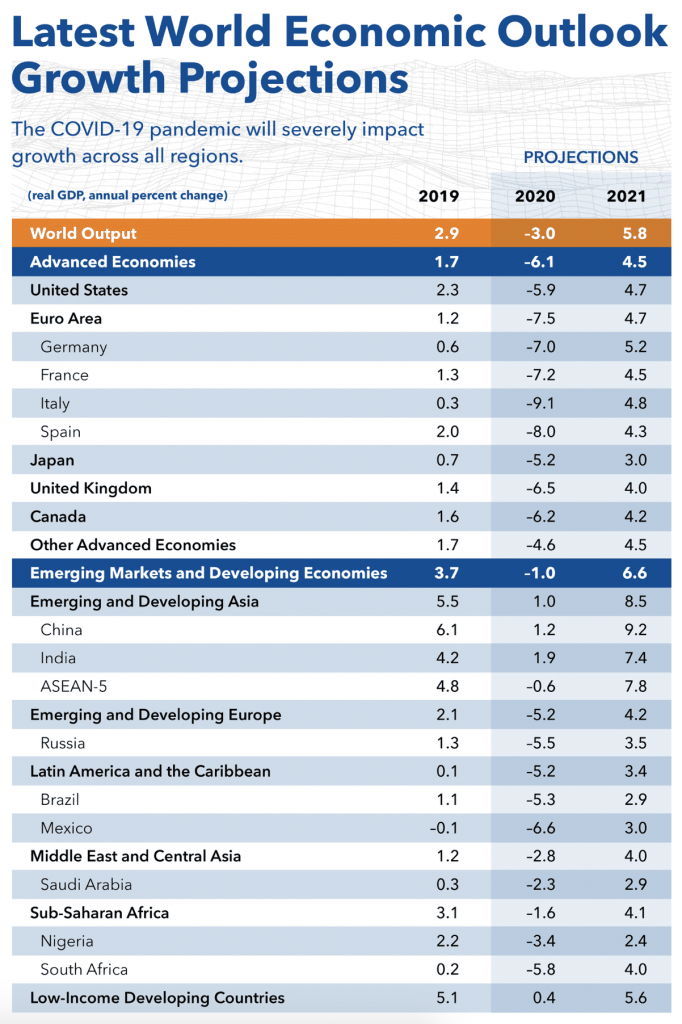 The world is facing an unprecedented event and no one really knows what is going to happen or when a real solution to Covid-19 can be found or a vaccine created.  In the meantime, other organizations that track economies have also come out with warnings for global contractions.  These include the World Trade Organization which has issued a statement warning of an expected 13% – 32% contraction in global economic output whose impact they expect to be felt for “a long time.”

Goldman Sachs also believes advanced economies contracting by about 35% in Q2 of 2020.  This despite what they see as a reduction in total coronavirus cases shrinking worldwide.  Their belief is this shrinking in total cases is all based on imposed isolation and social distancing mandates.  The firm’s economist Jan Hatzius, said, “The improvement is probably a direct consequence of social distancing and the plunge in economic activity and could reverse quickly if people just went back to work.”

Currency pairs move up or down based on expectations traders have for how one economy will fair compared to another one.  Be watchful for quick moves or unexpected changes in direction as countries around the world begin reporting how the coronavirus and their efforts to control it and protect their citizens through the Great Lockdown has impacted their economies.

Earnings season picks up as January ends on an upswing